Good news everyone! I have Windows 7 on my Lappy.

You may remember I wrote earlier that I received Windows 7 the day before it came out, thanks to Amazon’s fancy delivery department. The only thing putting me off actually installing the OS was that I lacked an external HDD. So for Christmas, that’s just what I purchased.

The HDD in question: 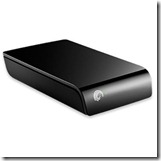 Quite the HDD indeed. With Backup and whatnot done on the old Vista installation, Windows 7 was duely loaded onto a freshly formatted hard drive.

I must say, the 15 minute install was very impressive. I did have a few problems however:

Other than that, the install was pretty painless.

Final thoughts: Windows 7 is indeed quite the improvement on the bloated monster that was Vista. Improvements in power management means I was able to squeeze another 30 minutes out of the battery, which is very surprising due to the battery coming up for 2 years in age. The only thing that is irking me slightly is the taskbar. The taskbar, when it gets full, groups by application, which can be a pain to navigate. I know this can be turned off but the option “Never Combine” just doesn’t cut the mustard. Also the time taken for Aero Peek to work is, by default, a tad too long. A simple registry change fixes this and makes the operating system, graphically, a bit more snappy. All in all, a great operating system indeed.