I'm a Japanese obsessed otaku. That is all~

Me again. When I was in my “serious” anime streak lately, I decided that, with the help of MAL’s User Recommendations, that Ga-Rei would be a decent anime for me to step up to. The plot of the anime is that there are these supernatural beings that are killing people, divided into categories based on their power. A-C is seen in Episode 1. The main plot of the anime revolves around a teenage boy who can see these beings, however he is not seen in this first episode.

The first episode starts off in a rather pathetic way. Some big nasty has gone down and the Government adopt a very elitist “Back off, know-nothing fire fighters. We will rid these beasts” attitude in their handling of the situation, with the oh-so-loved cliché “We’re in charge now.” They flip down these bits of orange glass in front of one of their eyes, and a thousand of these monsters kinda appear. You think “this is kinda cool”… then they shoot at them with regular machine guns and these things just rip apart… But then they come back and kick ASS and finally some good shit happens. These two Naruto-wannabes in Orange jumpsuits come along and start raping the shit out of these things, and you get the impression there’s hella back story. But basically there’s a whole team of them that go around fighting these… things.

When you watch the first episode, you get the impression it’s going to suck – and for the majority of the episode, you’re right – however in the space of about 10 minutes, it goes from terrible to amazing. The beloved transition I have seen many a time, my friends. The moving of the mouse from the stop button to clicking the OK button, selecting the second episode’s save destination. The graphics are good, the fight scenes get good after Team Naruto get involved, and I recommend it. That’s all from me this week, I’ll start reviewing funny anime soon, I promise you! ãÂ´ãÂ‹ãƒ¼ãÂ´ãÂ‹ï½žï¼Â

Me again :3 This week I kinda wanna tell people about this anime I started recently; it’s called Shikabane Hime, (a.k.a. Corpse Princess). Thing is right, I started this with high hopes, the plot summary is simple, Girl gets murdered but turns into a “Living Corpse”, and the only way to get into Heaven is if she kills 108 corpses, y’know – Simple. So I’m reading and thinking “108? What kinda number is that… but OMG, *downloads*” Regardless, I put it off. I don’t know why, maybe because it seemed a bit heavy going for me at the time? Or whatever. Basically, I started watching the first episode, and the whole thing FLEW over my head. You get your head thrust into the story with all this terminology you haven’t got a clue about, and for some reason there’s this talking cat who can go through windows, and the boy who I think is the “main” character, doesn’t seem to even flinch. If I saw a talking cat, I’d have screamed my ass off, let alone if it morphed through the window. But anyway, that aside, he seems to be a rofl character.

Moving on from the criticism lol, the main character – Kagami – is an orphan who is moving out to his own place. Prior to this, he is awoken by the cat and lead towards the worship room where he finds a dead mutilated corpse on the floor. THIS scares him, talking cat np, dead girl on a mat “OMFG!” But yeah, it turns out this girl is a Shikabane, a living corpse. At the time, they barrage you with a bunch of terms you should have been introduced to/explained about, but as the boy is hiding – with the talking cat b-t-dub – you would expect no explanation. The people who entered the room are monks from an Anti-Corpse group, and one of the reeeeeeeeaally hates this girl (Makina, which you’ll only learn once you realise that you need to actually listen to what they call her because you ain’t getting an introduction)

The fights are decent, mainly gun-action because she fights other Shikabane (the things she needs to kill to go Heaven, like her but BAD!) which are like, huge and all monstrous. I’d definitely check it out, the artwork is pretty good and the comedy is pretty unexpected or expected but still rofl – Especially Kagami, guy’s a joker! (See screenshots below) Definitely check it out, if you can handle being confused long enough, I’d definitely go for it, it’s 13 episodes long with a second season to boot. That’s all from me this week, much love~

Hihi~~ I’m Japs!~ Joe’s asked me to review some of the zillion Anime series I watch and as I’ve got nothing better to do lol I’ll do it whenever I can. This week’s will be Jigoku Shoujo (a.k.a Hell Girl), the name kinda implies what it’s about. The series starts off with a young girl who is being bullied quite vigorously by some brown haired chick. The bullied girl overhears these two girls talking, who are ALWAYS nearby in EVERY episode to conveniently talk loud enough for some poor sod to overhear, about a site called Hell Correspondence, where they will take reveange for you. At first, you kinda think it’s like Death Note meets the internetz, but you realise very quickly that the girl behind this is the most awesome girl you will ever see!! Enma Ai.

Enma Ai, along with her assitants (Hone-Onna, Wanyudo and Ichimoku Ren) and resolve your reveange ~ the cool catchphrase they use for this is “anata no urami, harashimasu” which litereally means ‘Your grudge/bitterness, I will dispel’ but y’know “We’ll take this reveange on your behalf” sounds so much more cooler… :3

But anyway, that’s what the gist of the anime is about really. If you’re wronged, you go to the Hell Correspondance website, which can only be accessed at Midnight. You enter the person’s name, and Enma Ai will hand you a straw doll, in the first season it’s usually the black one, you’ll see why though. You pull the string and Enma and her crew will go grab them some meanies~. However, in return, you too will go to hell when you die… But you get this AWESOME tattoo thing that shows the seal of the Covenant you make with Hell Correspondance.

Although quite repetitive, it’s an awesome anime to watch; the character art is very eye-friendly, the voice actors do their job superbly, especially Mamiko Noko, the voice of Enma Ai. She has this thing she says right before she does the dirty deed… ‘Ippen, shinde miru?‘ which is literally “This once, death see?” but lol many different translations has been seen, one of the best being “This once, I will show you death.”

Here are some screenshots to make you lust after the anime. That’s all for now~ Enjoy! (Remember, downloading is “baaaaaaad” – Also, right click View Image for bigger~) 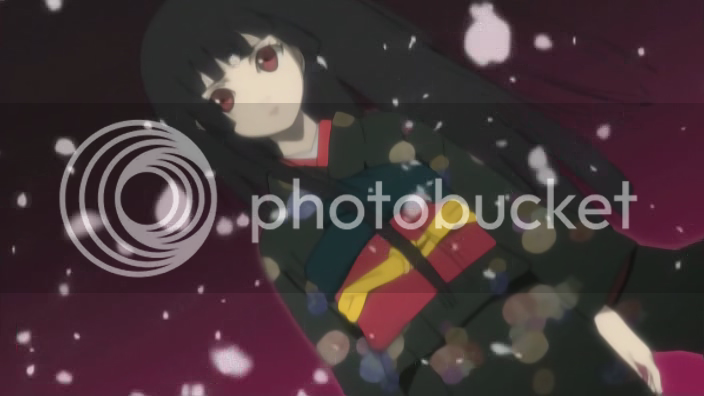