Now, I’m writing I’ve got no idea of WHAT to write.
Since I’ve become re-obsessed with Spyro the Dragon, I think I shall write about that. 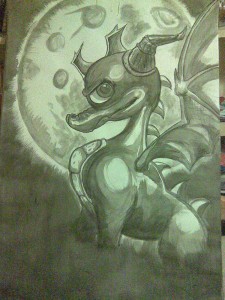 Firstly, it’s an absolutely brilliant game.  Â I got the original one for Christmas 1997, when I first got my PS1, and I haven’t ever had a bad word to say against it. Â And I admit it…I like it so much I robbed one of the sequels Â (Spyro: Year of the Dragon) from a 7year old friend of the family… I have no morals, I know.

Recently(ish) I was in Woolworths, however and I decided to go and buy (*GASP!!*) the latest Spyro game for my Wii… The Legend of Spyro: The Eternal Night (the image attatched to this post is an A1 ink painting a did in October, which I copied off the box of the game) It sounded so epic I had to buy it…it was  £40… which I didn’t really have. Thus, re-awakening my love affair with this heroic little purple dragon.

So I played it…got stuck on this blasted bit where the Dog-Pirates trap you in an arena and you have to outsmart this flying, fire-wielding boat, and so I put it away again whilst I ‘revised’ for A Levels. And then I moved out to South London, bringing my Wii and games, etc. Out came Spyro. Â Chij and Peter got a bit into Spyro over their Reading Week by watching me try to play it, and indeed, they DID help me get past the Dog-Pirates with their hover boat. So for this, I gave them both thanks. Peter also printed out the WalkThru for me, as well. So thanks for that too.

So after Halloween when I went back with Chij to Wales for my Reading Week, the Wii came with. I SHOULD’VE been writing my Art Essay, but instead I went to complete the game. Chij helped of course. But whilst he was at uni I stayed caved up in his room in the dark guiding the little dragon through levels of Pirates, Ghosts and other mean creatures.

Though he helped with the Boss (we each had a half of the Wii controls…he had the nunchuck and I had the remote) and we defeated the git! Â AND THEN!! OMGGGG!! SPYRO…BECOMES DARK SPYRO!! He’s so peng…he can hover in the air and shoot purple orbs at his enemies. I won’t ruin it and tell you HOW he becomes dark…but OMG. Â Then once you’ve finished killing the Boss, you complete five mini Dragon Challenges and unlock Dark Spyro. FOR EVER.

So now…I’m repeating the game AGAIN as Dark Spyro.

And yesterday I ordered six other Spyro games. For PS2, DS and GBA.

The Legend of Spyro: A New Beginning (PS2)

I NEED to collect and complete them all… so.. umm… if anyone has any of these games, that they don’t really want… umm… can I have them??? Â I might give you a few quid for them!!

Spyro: Attack of the Rhynocs

And I’m hoping to trade in some of my old crappy games in exchange for the other Spyro game, on the Wii: The Legend of Spyro: Dawn of the Dragon. Unless Peter can get it for me.

And now I’m in the process of playing the original Spyro again, getting EVERYTHING this time so i can get the whole 120%. And I’ll start on Year of the Dragon again too.

Oh… I know some Spyro cheats, if anyone cares… Â Type this when in the inventory screen to get a FREE 99 lives. And you can do this anywhere in the game:

And I’ve TONNES of Year of the Dragon cheats as well. Just Holler, if anyone cares. Or if you’re too potatoes to look on Gamefaqs.com

I need to go and play it again now.